How to mine bitcoin in Escape from Tarkov, 2021? 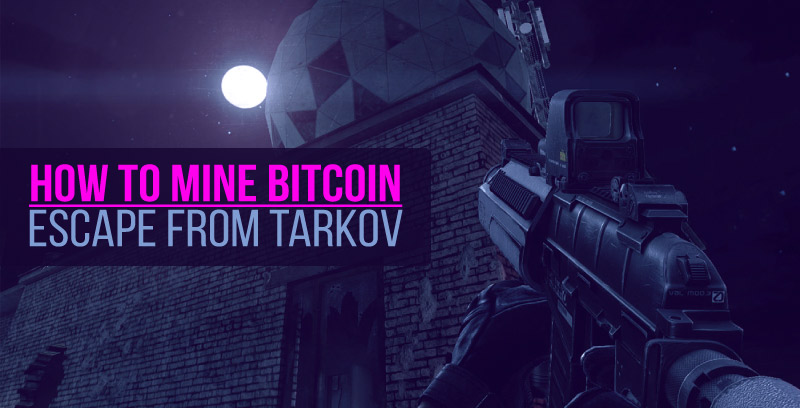 The video game industry is not unpredictable this year. It gets harder and harder to surprise video game fans every year. Nevertheless, many succeed, and now we will look at the game Escape from Tarkov – a product of the Battlestate Games team from St. Petersburg.

What is Escape From Tarkov in Escape from Tarkov?

Escape From Tarkov is a hardcore multiplayer first person shooter set in an alternative modern Russia. According to the plot of the game, two rival private military corporations clashed with each other in the city of Tarkov, causing panic and monstrous chaos there, which in turn gave rise to many clans of bandits.

Players will have to choose a side of the conflict and join the battle for the city, constantly monitoring their own lives. There are many ways to die in Escape From Tarkov, from an enemy soldier’s bullet to a massive radiation background. Players will be able to learn over a hundred different unique skills and go through a long chain of tasks that sheds light on the city’s past and increases the chances of survival.

The bitcoin farm in Escape From Tarkov is one of two improvements you can make to your hideout, allowing you to generate passive income, but it’s expensive to build and doesn’t explain well in the game.

This guide will explain what a Bitcoin farm is, how it works, and how much resources it costs to invest in it.

How to get Bitcoin in Escape from Tarkov?

Bitcoins are very rare loot that can be found in safes, duffel bags, jackets, stashes, or in a navigator’s drawer. Wherever you look, bitcoins are extremely rare. The only reliable way to get them is on a bitcoin farm.

A Bitcoin Farm is one of two ways to generate passive income through your hideout, and the only other option is Scav. Unlike crafting with other stations or using a Scav case, a bitcoin farm will produce bitcoins at a constant rate if you have at least one GPU in the farm and your generator is turned on.

From 2019, it will be possible to host a bitcoin farm in the game’s hideout. To bring the shelter up to work, the first thing the player will need to install is an electric generator that consumes fuel. If there is a shortage of fuel, production and recovery of characteristics will be slowed down or stopped. It should also be noted that the size of the cache will directly depend on the level of the Storage. Players with a non-maximum release of the game will be able to increase their stash to level 4.

In addition to the main modules of the shelter, the player will be able to install advanced modules that radically improve the level of life and safety, accelerate the pumping of skills, allowing you to get unique items and resources. A full-fledged shooting range is worth noting separately, where the player can try out weapons. The hideout will become an integral part of the game, which will justify all the extra-transition processes that occur with the character – health restoration, cache size, access to trading services, as well as to research objects and events in the world of the escape game from Tarkov.

Bitcoin Coin (0.2BTC) is an exchange item from the group of values ​​in Escape from Tarkov. The Bitcoin farm will produce bitcoins at a rate of 0.05 + (GC – 1) / 49 * 0.15 items per hour, where GC is the number of GPUs installed. Production stops if no graphics cards are installed, power is off, or there are 3 bitcoins waiting to be collected.

Video cards do not lose the “found in raid” mark when installed and removed from a bitcoin farm.

Chart and table showing the relationship between the number of graphics cards and the time it takes (in hours) to produce one bitcoin.

A Bitcoin farm will produce bitcoins at a constant rate depending on the number of GPUs installed on the farm. For now, GPUs do not affect longevity or condition and can be used indefinitely, so this is not a recurring expense.

One graphics card will produce one bitcoin every 20 hours, but this time can be reduced with additional GPUs. A tier 1 bitcoin farm can hold 10 graphics cards and, if full, will produce bitcoins approximately every 12 hours and 50 minutes.

A level 2 farm can hold a total of 25 GPUs, and a level 3 farm can only hold 50. But the benefits of using more cards are diminishing.

← Generally there are several users in NBA 2K21 Cover whose reviews are to some degree high as well as are irregular with their staminas. NBA2K MT includes a new 90-point player plus the most current locker code →